Properties of SF galaxies with high [OIII]/[OII] ratios with MUSE

Using data from various MUSE surveys, including MUSE-Wide, we test whether extreme [OIII]/[OII] (O32) emitters have properties, such as star-formation, different from normal, star-forming galaxies. All, but the most extreme O32 emitters’ properties can be explained through very low metallicity models without the need of Lyman Continuum Leakage.

We present a study of the [OIII]5007/[OII]3727 (O32) ratios of star-forming galaxies drawn from MUSE data spanning a redshift range 0.28<z<0.85. Recently discovered Lyman continuum (LyC) emitters have extremely high oxygen line ratios: O32>4. Here we aim to understand the properties and the occurrences of galaxies with such high line ratios. Combining data from several MUSE GTO programmes, we select a population of star-forming galaxies with bright emission lines, from which we draw 406 galaxies for our analysis based on their position in the z-dependent star formation rate (SFR) – stellar mass (M*) plane. Out of this sample 15 are identified as extreme oxygen emitters based on their O32 ratios (3.7%) and 104 galaxies have O32>1 (26%). Our analysis shows no significant correlation between M*, SFR, and the distance from the SFR-M* relation with O32. We find a decrease in the fraction of galaxies with O32>1 with increasing M*, however, this is most likely a result of the relationship between O32 and metallicity, rather than between O32 and M*. We draw a comparison sample of local analogues with <z>~0.03 from SDSS, and find similar incidence rates for this sample. In order to investigate the evolution in the fraction of high O32 emitters with redshift, we bin the sample into three redshift subsamples of equal number, but find no evidence for a dependence on redshift. Furthermore, we compare the observed line ratios with those predicted by nebular models with no LyC escape and find that most of the extreme oxygen emitters can be reproduced by low metallicity models. The remaining galaxies are likely LyC emitter candidates. Finally, based on a comparison between electron temperature estimates from the [OIII4363]/[OIII]5007 ratio of the extreme oxygen emitters and nebular models, we argue that the galaxies with the most extreme O32 ratios have young light-weighted ages. 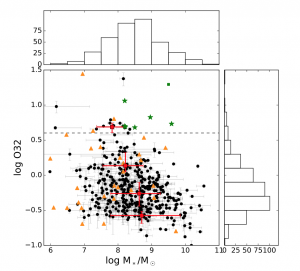 Previous post: A measurement of the Ly α emitting fraction among z > 3 galaxies    Next post: A determination of the Lyman Alpha emitter luminosity function at z=3-6